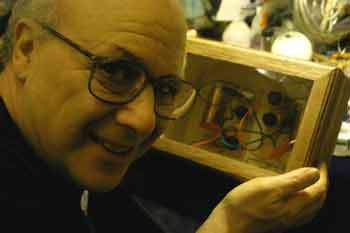 Most "aliens" are interdimensional travelers. The ones who aren't are wormhole navigators.

It wasn't that long ago that Earthian humans were dumbfounded by oceanic travel. Trans-Oceanic shipbuilding is a fairly recent science dating back to the 15th and 16th centuries, although small oceanic vessels were built by the Vikings, Phoenicians, Minoans, Atlanteans and Polynesians as early as the 3rd Millenium B.C.

Still, it wasn't until recently that ocean voyages for the average person became commonplace.

Air travel is of course even more recent, and when I was young, there were no jet planes, only noisy erratic prop planes which flew at relatively low altitudes and were totally subject to weather and bumpy air pockets, and had crude instruments for navigating fog and for landing.

Now, air travel is quite commonplace and distances are cut by the increased speed of air traffic. Instead of hundreds of flights per day, it's in the tens of thousands. Planes are so computerized that they almost fly themselves...and we're just on the brink of space travel not just for astronauts but for the common folk -- that'd be you and me. Some civilians have already flown into space, at least into orbit.

Many ET civilizations have survived their own Nuclear Age. We might not, because humans are very warlike creatures, just like our nearest DNA neighbors, the chimp.

Will there ever be a nuclear war? We already had one. It was called World War II, and during that war, two nuclear weapons were dropped in Japan, one on the city of Hiroshima and the other on Nagasaki...and what's more, the Germans had The Bomb and were just on the verge of exploding it in the harbor of New York City when the war ended.

Just as there are many kinds of "aliens" or ET visitors to Earth, there are many modes of interdimensional travel. One of them utilizes a simple survival vehicle which humans have characterized as a UFO or "Flying Saucer".

The shapes of UFOs will vary considerably and many of them are not at all saucer-shaped. Some are cigar-shaped, some are shaped like a spinning top and some look like strange lumpy rocks or meteorites. Still others are unclear and tend to pop in and out of Earth's dimensional atmosphere like electrons vanishing from one orbit and suddenly appearing in another location.

Methods of travel will vary as widely as their vehicles, but when they appear on Earth with UFO, USO or UBO vehicles, you can be sure they have made their Trans-Dimensional Sea Voyage by way of wormholes, most of which are created by the vehicle's "warp engines" as opposed to their antigrav local motors.

Interdimensional travel depends largely upon interdimensional navigation. Some ET visitors know how to get back "home". Some don't, and in this way resemble the Vikings who had no plan to return once they got wherever they were going.

As civilizations on Earth learned more about sea voyaging, the science of navigation also grew and expanded accordingly. Cartography -- map-making to you -- and the use of astrolabes, compasses, depth sounders, anti- weather measures, long-distance submarine travel and more became urgent. Accurate time-keeping is a product of marine voyaging.

Einstein explored what happens to time during lightspeed travel. His whole exposition on a Unified Field of Reality is dependent upon what he imagined would happen if someone were able to run with photons at the speed of light, and much of interdimensional travel is about answering the magic question, "if I were traveling at the speed of light and I turned on a flashlight, would anything happen?".

There are several types of interdimensional travel that you need to be aware of. One of these is IBV, or In-Body Voyaging, in which one enters a UFO vehicle and navigates through one or more wormhole from one dimension to another or through a single "Brane" dimension by use of wormholes to leave and re-enter that universe.

We should differentiate "universe" and "dimension". A universe is a contained space-time continuum boundaried by a membrane, or "Brane", while a Dimension is merely a vector related to locational loci or "points" of place-ness.

When traveling In-Body from one dimension to another, definite space and time phenomena will be experienced. Time happens differently as we travel up and down the scale from energy to matter, from e to m in the equation e=mc2.

But...there is a different style of interdimensional travel, one which does not depend on UFO vehicles and which has been used by shamen and magicians and witches and warlocks and all sorts of religious nuts throughout the ages of Earthian human existence.

This "OOBE" -- Out Of Body Experience -- type of interdimensional travel is commonly called "Astral" travel and is quite common. As a matter of fact, it is experienced by YOU every single night, but you have been trained by your culture to call it "dreaming".

Every single night you leave your body for some length of time. It might only be seconds or even milli or micro seconds, but leave it, you do.

Of course remembering what happened is not easy, because in order to leave the body, you must pass through the deep darkness of the Delta IV stage of sleep, which has the effect of short-term memory erasure, to buffer your psyche from any off-world or strange experience that might impinge upon your everyday psyche.

The Essential Self can handle many types of existence and many kinds of physics, but the delicate daytime psyche typically can't...

And so we adjust our dreams to resemble our daytime reality.

If you were able to remain conscious during Out of Body Interdimensional Voyaging, which we call "Astral Slipstreaming", you'd be able to easily remember what you'd seen.

Keep in mind that you travel in this way all day and all night long. You slip in and out of a variety of parallel worlds all the time...but you are trained to live in the Beta-Brain, so you don't notice the space changes that happen to you all the time.

When you were a child, you had no such mental buffer, and you were aware of the continual shifting realities.

It's time now to re-learn those skills and to see where you actually are.

Until you can see the path, you cannot consciously walk the path.